Perception is considered by Merleau-Ponty as a function by virtue of which the perceiving subject has access to, and communicates with, perceptual things and the perceptual world at large. The latter have to be taken as they offer and disclose themselves in direct perceptual experience, with all their vagueness, indeterminateness, incompleteness, and openness. No reference must be permitted to the ideal of scientific knowledge, i.e., the idea of the universe such as the latter will prove at that final phase when science will have accomplished its work: a universe completely determined in itself, all divergences "somehow" reconciled, all syntheses "somehow" achieved. It is the mentioned idea, the "prejudice of the world" (le prÉjugÉ du monde), that, according to Merleau-Ponty, has vitiated the classical approach to perception, both the empiricist and the idealist approach alike. For a phenomenological approach to perception, the "prejudice of the world" must be discarded altogether. Rather than being accepted and adopted as a matter of course, the idea of a scientifically determined universe must be examined as to its origin, justification, and limits of validity. It must be examined with reference to, and in the light of, the perceptual world in its authentic and genuine shape, i.e., that shape in which it presents itself to the perceiving subject in vital intercourse and communication. Thus orienting his studies, Merleau-Ponty follows and develops ideas which Husserl advanced in the last period of his life. It is in fact the last period of Husserl's which is of paramount importance for Merleau-Ponty's work. 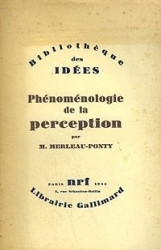