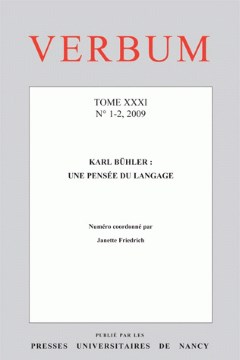 This introduction develops the idea that Bühler’s Sprachtheorie comprises a twofold program. First, Bühler aims at uncovering the axioms which are at the basis of empirical investigations of linguistic phenomena and guide these investigations. Second, he attempts to grasp the “mechanism” of language functioning (its perfor-mance) by elaborating a theory which containsan original conceptual apparatus,still relevant for contemporary debates. Thus, readings of the Sprachtheorie which, relying on its four axioms, consider it either as a functionalist approach or as a semiotic approach or as a semantic approach will be analyzed and put intoperspective as concerns their ability to constitute this theory of language. Finally, through a discussion with the other contributions in this issue, the paper considershow Bühler analyzes this performance which is said to be proper to language.